Cycling downtown along the Tampa Riverwalk

A cigar roller shares his craft in Ybor City

All smiles at the Florida Aquarium's Splash Pad

Sharing a toast on a boating trip

A fun family outing in the Hyde Park neighborhood

As the hip, urban heart of Florida’s west coast, Tampa Bay offers eternal sunshine, swaying palm trees and breathtaking sunsets for visitors seeking to replenish the body and soul. This diverse Florida destination brings together activities to fit any travel whim. Float on a river surrounded by native wildlife, get caught up in a pirate parade, indulge in the latest food and wine trends, sip a locally brewed beer or refresh your wardrobe at shops both trendy and vintage. Family-oriented attractions, museums, historic sites, lively events and vibrant nightlife guarantee that everyone in your crew will have lifelong memories to share.

At the Glazer Children’s Museum, kids can play pretend as a doctor, veterinarian, artist or engineer on two levels packed with interactive exhibits. Discover wild animals from land and sea at ZooTampa at Lowry Park, The Florida Aquarium and TECO Manatee Viewing Center in Apollo Beach. To get fully immersed in nature, book a paddling tour with Canoe Escape to see alligators, birds and turtles on the Hillsborough River. Scientists-in-training will have hands-on fun at the Museum of Science and Industry (MOSI). Known for its heart-pounding roller coasters, Busch Gardens® Tampa Bay is a can’t-miss attraction, particularly if your group has older kids and thrill seekers. Be sure to buy the Tampa Bay CityPASS. You’ll get admission to some of Tampa Bay’s best attractions at a discounted rate.

The pedestrian-only Tampa Riverwalk links downtown’s hotels, restaurants, parks and shops, making it easy to cool off with a drink at a waterfront bar then catch a sightseeing cruise into the bay. Nearby, there’s plenty to see and do in the Channel District, including the Sparkman Wharf open-air food hall and Amalie Arena, home to the Tampa Bay Lightning hockey team. The Hyde Park neighborhood offers classic drinks, elegant spas and chic shopping. Up for a party? Trendy clubs like Ciro’s Tampa and Edge Rooftop Bar welcome night owls drink specials, music and dancing. Hipster haven Seminole Heights is known for its alternative atmosphere. Enjoy craft beers at Angry Chair Brewing, indie bands at the Independent Bar and great food at Ella’s Americana Folk Art Café. On weekends, let Brew Bus do the driving on the Local Loop tour of craft breweries.

A Date with History

Long before Tampa Bay was a tourist destination, native Tocobaga, Calusa, Seminole and Miccosukee Indians called it home. See an outstanding collection of tribal artifacts at the Tampa Bay History Center along with hands-on discoveries from the Age of Exploration, allowing you to join a pirate crew, chart your course with a sextant or test your skill as sailor knots. In January, play pirate-for-a-day when legendary buccaneer José Gaspar and his crew sail into downtown with their cannons blazing. Join the throngs along Bayshore Boulevard cheering the pirate parade and collecting treasured beads flung from the floats.

The heart of Tampa Bay’s Cuban history is Ybor City, where Cuban masters still hand-roll some of the world’s best cigars as they have since the community was founded in 1885. The neighborhood’s brick streets and iron balconies call to mind the days when Tampa Bay earned its nickname, “Cigar City.” Stop in at any of the boutiques along 7th Avenue (La Séptima) to watch masters at work and sip a strong café con leche at a sidewalk table. Enjoy an authentic Cuban meal at the Columbia Restaurant, the oldest restaurant in Florida. Stay late in Ybor for unbeatable nightlife.

At more than 8 kilometers long, the Bayshore Boulevard bike path is believed to be the world’s longest unbroken sidewalk.

Orlando to Tampa: Where to Stop on Your Florida Road Trip

Where to Shop on Your Visit to Tampa Bay, Florida

St. Pete/Clearwater, Florida: A Tour of Nature, the Arts and Beaches

6 Ways to Play Outside on Florida’s Adventure Coast

Scalloping on the West Coast of Florida

Sarasota, Florida: By Land and By Sea

Sample the Flavors of Sarasota and Charlotte Harbor, Florida

Polk County for Families: Fun on Land and Water in Central Florida

Beach Time and Theme Parks in Orlando and Tampa, Florida

Miami to the Everglades: From the City to the Sawgrass 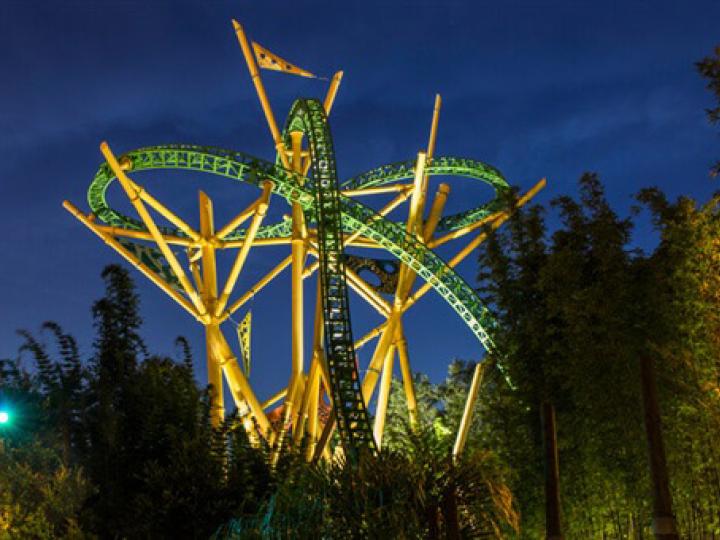 Christmas in the Wild

Beach Time and Theme Parks in Orlando and Tampa, Florida