Taking in the stunning scenery of Falls Park

Family admiring the lights of Winter Wonderland at Falls Park

Aerial view of Falls Park and the downtown skyline

Eclectic exploring in the heart of the USA

Summer is the best time to visit Sioux Falls, but you’ll find excitement year-round in South Dakota’s biggest city. Located at the junction of two major interstate highways (Interstate 90 and Interstate 29) in eastern South Dakota, the city radiates an edgy urban vibe but celebrates its rich history and the fertile land surrounding the Big Sioux River valley. Your itinerary should include exploring an abundance of outdoor treasures, trying local food and craft beer, and taking in public art and live music.


The Falls: Epic Nature in the City Center

Sioux Falls is home to "The Falls" of the Big Sioux River, a waterway system that has been flowing in its present course for thousands of years. The falls have been a focus of life in the region throughout history, from prehistoric people who inhabited the area before 500 B.C. to the Lakota and Dakota tribes in the 18th century to modern day. Surrounding the falls is beautiful Falls Park, a 50-hectare green space in the heart of the city. The pink quartzite rock, or Sioux Quartzite, seen at Falls Park is native to the area and was used to construct roads and many of Sioux Falls’ first buildings. Its rustic, rosy hue is easily recognizable when viewing the city’s skyline.

Steps west of Falls Park is Phillips Avenue, the main thoroughfare in historic yet vibrant downtown Sioux Falls. It’s home to SculptureWalk, a nationally renowned collection of 60-plus outdoor sculptures displayed year-round. Each year, the pieces range from stately to whimsical, but a capstone is always the Arc of Dreams. This massive permanent sculpture spans the Big Sioux River and towers seven stories above the water between 6th and 8th streets.

Live music and theater also abound here: Catch a performance at the Washington Pavilion, which houses performing arts, visual arts and interactive science exhibits; the Orpheum Theater Center, which opened in 1913 as a vaudeville house; and the Denny Sanford Premier Center, a 12,000-seat concert venue that hosts artists from all over the world.

Sioux Falls’ creativity is further expressed in its culinary scene. The city’s award-winning chefs are risk takers, with many dedicated to crafting farm-to-table menus. The inventive spirit of local brewers is equally endless, and each brewery has its own personality and philosophy. This is reflected in the always-changing lineup of craft beers found here.

Minutes from downtown is Good Earth State Park at Blood Run, a National Historic Landmark that served as a crossroads of Native American civilizations from 1300 to 1700. Start at the visitor center exploring a variety of exhibits focused on the cultural and historical significance of the site. Learn how the Oneota Indigenous Peoples depended on the river, wildlife and fertile flood plains. For more local history, tour the Pettigrew Home & Museum and the Old Courthouse Museum, both rich with insight into and artifacts from Sioux Falls’ formative years.

The first four-door automobile, the Fawick Flyer, was invented in Sioux Falls by Thomas Fawick, who also donated the casting of Michelangelo’s David statue that stands downtown in Fawick Park.

Sioux Falls is named for the Sioux tribe of American Indians and the waterfalls of the Big Sioux River, which encircles the city.

Where South Dakotans Go to Hike

Ask a Local About Nebraska

Bloomington and Mall of America: So Much More Than a Mall!

Ask a Local About Minneapolis, Minnesota

How to Best Explore Minneapolis, Minnesota

Pride in the Twin Cities

Fun at the Minnesota State Fair

Museum of Quackery and Medical Frauds

See the Sandhill Cranes and Other Spectacles in Nebraska

Marine on St. Croix, Minnesota, Through the Eyes of Painter Bob White 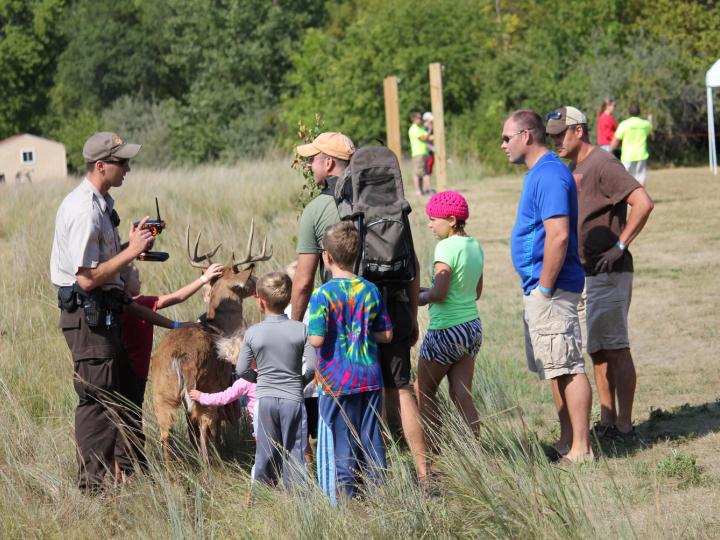 Levitt at the Falls

Ancient History and the Old West: Road Trip in North and South Dakota

Symphony in the City: Orchestras and Operas around the USA