Showing off mountain biking skills at the Trailside Bike Park

Relaxing at Town Lift Plaza after ski runs on the mountain

Hiking through wildflowers on trails in the Wasatch Mountains

Snowboarding on a perfectly groomed slope

Thrilling ride down Park City Mountain aboard the Alpine Coaster

Relaxing poolside with a drink and incredible mountain views

Listening to live music after a day in the mountains

Trolley making a stop at the Egyptian Theatre on Main Street

The historic 1900s barn made of recycled timbers at McPolin Farm

Adventures on and off the mountain slopes

Whether it’s winter or summer, travelers can combine adventure in the Wasatch Mountains with fun and relaxation in the historic silver mining town of Park City, Utah. Park City is a 35-minute ride from Salt Lake City International Airport, which has 300 daily flights from 80 cities. After arriving, you’ll find a variety of lodging, dining, shopping and other off-mountain activities, as well as two ski resorts and the Utah Olympic Park offering outdoor recreation in the fresh mountain air.


Year-Round Fun on the Mountain

Known as a winter destination, Park City is home to two world-class resorts, Deer Valley and Park City Mountain. Park City Mountain features the largest lift-accessed terrain in the United States. With over 300 trails, 41 lifts, 8 terrain parks, one super pipe and one mini pipe, Park City Mountain has adventure for all abilities and ages. Meanwhile, Deer Valley Resort is recognized as the first North American ski resort to provide the first-class service of a five-star hotel. Not surprisingly, it’s consistently ranked number one in a variety of categories by readers of SKI Magazine. In addition to the world-class skiing, visitors to Park City can enjoy plenty of winter fun off the mountain such as dog sledding, snowmobiling, snow tubing and Nordic skiing.

Looking to visit in spring, summer or fall? Go hiking and biking on 700 kilometers of trails, or try hot-air ballooning, horseback riding and fly-fishing. Ride an alpine slide down a mountain, go boating and stand-up paddle boarding on a pristine lake or stream, and fly through a forest on a zip line.

Experience Utah’s Olympic legacy at Utah Olympic Park, built for the 2002 Olympic Winter Games. Today, the park is a year-round U.S. Olympic training site, active with athletes of all ages training for Nordic ski jumping, freestyle skiing, bobsled, skeleton and luge. The park has six Nordic ski jumps and a sliding track, one of four in North America, which you can experience for yourself by taking a ride down in a four-person bobsled. There are also a variety of adventure activities and two free museums to explore, Alf Engen Ski Museum and Eccles 2002 Olympic Winter Games Museum.

Park City is worth exploring, and getting around is easy with the free bio-diesel and electric bus system. During the warmer months, explore this bike-friendly community with the electric bike-share program. Explore Main Street using the free trolley or take a stroll to easily duck in and out of historic buildings housing eclectic shops and galleries. For history lovers, visit the Park City Museum for interactive exhibits, artifacts and the city's original jail, located in the basement.

Check-out the Egyptian Theatre – center of Robert Redford’s Sundance Film Festival, an annual gathering celebrating independent film artists. Find time to attend a play, comedy show or concert, then hop around the many different places to hang out for a drink, including the No Name Saloon, housed in one of the most iconic buildings on Historic Main Street. Built in 1905, it was originally known as The Alamo. Sample a flight of craft brews at Wasatch Brew Pub or Park City Brewing Company. Finally, relax at one of the many spas around town or go for retail therapy at Tanger Outlets.

In 2006, the High West Distillery became Utah’s first legal distillery since 1870. Its High West Saloon, a ski-in gastro-distillery, opened the same year in the Old Town district of Park City.

In 1963, subway cars carted skiers to the slopes via a dark, cold, wet one-hour ride through old mining tunnels in Treasure Mountain, now known as Park City Mountain. Skiers then used a mining elevator to lift them 533 meters to the base.

Where to Ski in the USA for Families

Where to Get a Jump on Ski Season

A Weekend in Park City

Where to Ski in the USA for Experts

Yellowstone Loop: 9 Stops You Must Make on an Epic Western Road Trip

7 Luxury Travel Ideas for Your Trip to Utah

Utah: A Breathtaking State of Adventure

Getting the Shot: Climbing the Penguins in Arches National Park

Getting the Shot: Mountain Biking in Moab, Utah

An Unforgettable Winter Getaway… for Elk? 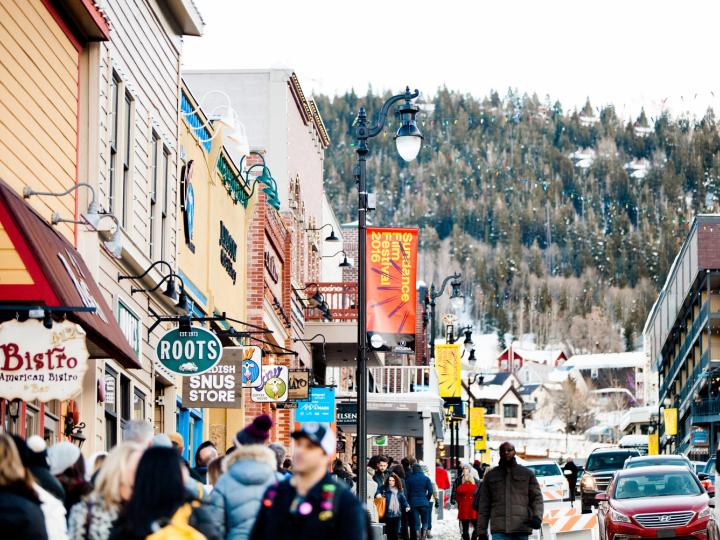 Getting the Shot: Mountain Biking in Moab, Utah

Getting the Shot: Climbing the Penguins in Arches National Park

Where to See National Parks Adventure

Where to Stargaze in the USA

Where to Ski in the USA for Families